Gold coins come in many different sizes because of the demands from the customers. The manufacturers and mints around the world knows that the average collector might struggle with paying 1500-2000 euro for a 1 oz gold coin, and prefer smaller coins with the same appeal. For investors, the 1 oz coin [...]

Gold coins come in many different sizes because of the demands from the customers. The manufacturers and mints around the world knows that the average collector might struggle with paying 1500-2000 euro for a 1 oz gold coin, and prefer smaller coins with the same appeal. For investors, the 1 oz coin is still a very popular choice and you usually get good value for your money, with prices just above the market spot price. These coins are also easy to sell, when it comes to that.

Gold coins have been used in different cultures for thousands of years and they still leave people in awe when they gaze upon them. It’s no surprise that they keep coming back as the symbol for the ultimate treasure in movies, games and literature. Nowadays the coins are not used in trade, but as collectibles and investment hedge against turbulence in other financial investments.

5 gold coins for every investor and collector 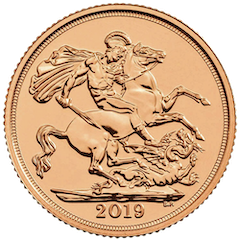 The gold Sovereign is the most famous of the British gold coins. It’s relatively small compared to other popular gold coins. The standard gold sovereign is a 22K gold coin with a red tone due to a mix with copper, and only contains 0.24 oz gold (7.32 grams). The coin was first minted in 1489 by the Tudor king Henry VII. It was not until 1817, the famous design of St George and the dragon appeared on the coin. The flip side of the coin contains the current monarch of Britain. The gold sovereign is used in many stories and movies, for instance by James Bond, in the move ‘From Russia with love’. 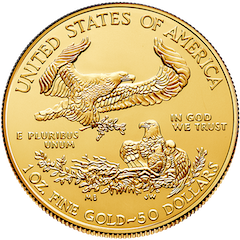 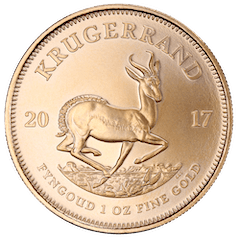 The South African Krugerrand coin is a special coin. It was minted with the purpose to market South African gold and it gained a lot of attention. Still today it is one of the most popular gold investment products in the world. The coin struggled during the 1980’s when parts of the world protested against the apartheid system of South Africa, by establishing trade boycott against the country. The coin features the face of Paul Kruger, a man originally from Germany that served as president in South Africa for many years. And on its revers side is the national animal of South Africa, the springbok. Like the gold sovereign, the Krugerrand is a 22K coin with copper that gives it a light red tone. The standard coin contains 1 oz of pure gold, and is also available in smaller sizes; 1/2 oz, 1/4 oz and 1/10 oz. 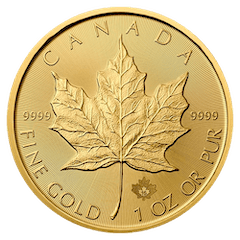 The Canadian maple leaf coin is available both in silver and gold and minted by the Royal Canadian mint. The coin first appeared in the 1970’s, which makes it relatively young. During the boycott of the South Africa in the 1980’s the Canadian maple leaf gained lots of traction as an investment alternative and it has remained up there ever since, much due to the great quality by the Canadian royal mint. This coin has one of the purest 24K gold in the world, according to the mint. The coin is popular with both collectors and investors and come in four sizes; 1 oz, 1/2 oz, 1/4 oz and 1/10 oz. The Peth mint in Australia mints these wonderful investment coins since 1986, as a tribute to the Australian gold industry. The coins were called ‘Nuggets’ with designs of famous record-breaking gold nuggest found in Australia. Eventually the image was replaced with a kangaroo and the coin changed its name to Australian gold kangaroo. Every year there is a new design of the kangaroo, which makes it popular among collectors. The Perth mint create some special coins some years but the standard set that is available every year is coins ranging from 1 oz, 1/2 oz, 1/4 oz and 1/10 oz. The coin is 24K gold.

Gold vs silver and other investment metals

Gold has historically always been the metal that everyone runs to in times of instable financial markets. The price of gold is there for mainly set by the demand by investors and the world central banks. The central banks by gold by the tone as a buffer and security behind its financial policies. The buying and selling of gold between central banks is highly political and is tracked by economists all over the world. The Gold Council is a global organization set to manage and report on the state of gold in the world.

A small part of the gold price is set by the electronics and jewelry industries. Gold is a good conductor of electricity, but not as good as for example silver. By following the gold price you can make smart investments. Gold is also considered by most countries to be an investment. Silver and other metals is not considered an investment, but a commodity. This means that gold is excluded from VAT, which makes it easier to trade on similar terms all over the world.